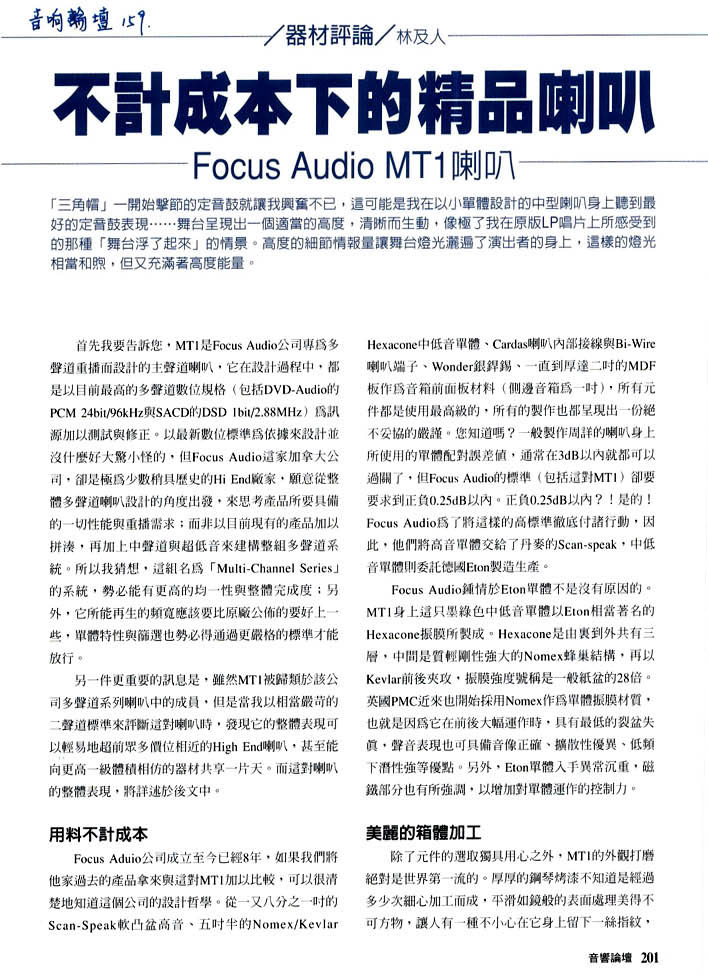 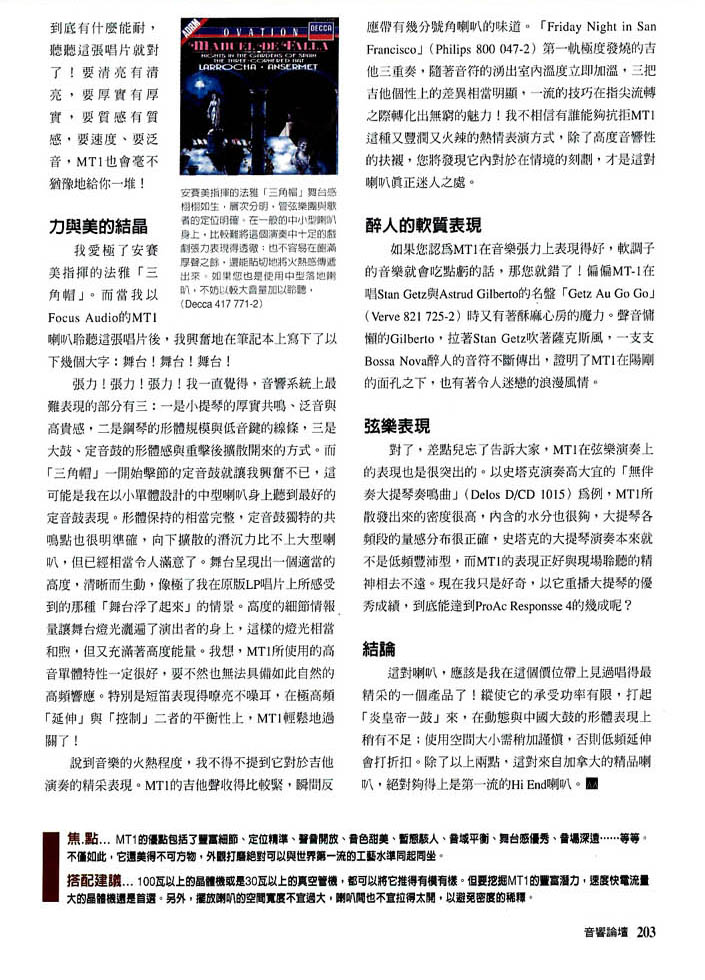 Restarting this audio blog again. I hope it gives me personal time to separate my daily work, and leave a log on my audio journey. My whole life since high school and career has been surrounded by audio and music. The above post is Focus Audio MT-1 speaker reviewed by Audioarts magazine in Taiwan. I was the co-designer back then, supervised by Focus Audio Mr. KM and Roger, when SACD and high resolution audio (remember DVD-A?) are about to enter the market. It was winter 1999, McGrill University was researching for new generation high resolution audio format in surround formats. I was learning the way how to design and produce passive speakers that would translate my own recordings to the audience with few key benefits.

MLSSA measurement helped me a lot to understand differences between sound in my head to speakers playback. It was a very effective ear training too that we can adjusted different values of passive components and identify sound changes on measurements vs. listening. In the early days I was very active in live recording for orchestra and jazz chamber groups in high school and university. Those couple hundreds recording were so helpful that started my career and joining Canada AES society. CBC (canada broadcasting company) was very active in all AES activities.

At the end of the Focus Audio MT1/MC1 research we achieved marvellous results. Mr. Richard King, who recorded for Sony film “Crouching Tiger, Hidden Dragon (臥虎藏龍) was monitored by FA multi-channel series and won a Grammy. I think Mr. King is still teaching and research in McGill University with Mr. George Massenbury and Wieslaw Woszczky. A true all stars team.

During MT1/MC1 development, we were using the wonderful sounding Ayre Acoustic K1/K3/V1/V3 amplifiers. It was also my own reference for recordings works. Ayre founder and Chief designer Mr. Charles Hansen passed away on November 28th, 2017. I read the early story about his very serious bicycle accident and how he took care insurances for all employees. I can only miss this old friend through music listening, and best luck to Ayre Acoustics 8 Series new models.

One of the main reasons, high end audio business has been struggling for many years mainly due to mobile/internet has made everyone a multitasker. While visitor audition in our showrooms, they are at the same whatsapp to their friends about their impressions, taking photos for audio forums, instagram and facebook, using soundhoud to search songs that they are listening. Speaking of myself, I’m listening Tidal best classical compilation while writing this blog.

On the other hand, I will continuous encourage people (especially myself) to find time listening music, without doing other task. Everyone who became an audiophile, were impressed by good audio system to reproduce good recordings. This impression to me is like time travel.

After Focus Audio Multi-channel series, I also contributed the later stage FS888 design, at the same time leads transforming Switzerland Weiss Engineering from a pure professional audio company into a high end audio company. The Weiss professional DAC1 made a serious impact to me and was rated one of the “Holy-DACs” back then. That model became the first Weiss high end product “MEDEA”. We shall save it for another day.