The DAC2/Minerva is the new product line from Switzerland manufacturer Weiss Engineering. Weiss hold an unique position manufacturing ultra high quality products for both high end consumer and professional markets. Chief designer/owner Daniel Weiss joined Studer digital audio lab 5 years before he found Weiss Engineering in 1985. Daniel designed sampling frequency converter and digital signal processing electronics for recorders ( JVC, Sony F1 and Sony 1630/1610). This was the day before the AES/EBU interface existence. Daniel ideas are always ahead of its time. Some of his latest designs were rooted many years ago, but waiting for the DSP power in order to execute correctly. 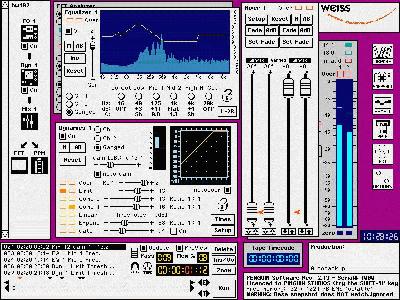 From the beginning stage of business, Weiss Engineering put its focuses on the highest quality demanding mastering studios. The legendary modular “102 Series” is milestone in mastering world. Up to date 24/96 processing, 102 Series is still being used in many CD/DVD/SACD productions today. It is proven that Weiss products are very long lasting. Modules such as Low cut filter, hardware control panel, software GUI on Mac, Level Control, 4 in 2 Mixer, Dynamic processors, Equalizers and many more were designed to fit in the 102 frame.

During my mastering life in Canada, I was one of the lucky owners of Weiss Gambit series, including the fabulous DAC1. I have very close connections with Asia audiophile circles, provide consultancy for few HiFi manufacturers and distributors, plus audio senior contributing editor for Leo Fung’s “Journey To Sound” magazine at that time. Daniel showed me his interest to develop a high end consumer line, and I was involved since then.

It was 2001 that I brought the first Medea prototype DAC back to Hong Kong. In just a very short period, Medea becomes the best sounding DAC in high end consumer market all over the world. Reviews from Taiwan AudioArt, Hong Kong, The Absolute Sound 2003 Golden Ear Award, Stereophile and more. The Stereophile measurement has shown Medea a text book perfect design. In 2005, the matching Jason up-sampling CD Transport was launched. The Jason/Medea combo is still the digital front end to beat in HiFi market even with today standard. Daniel Weiss products are not fashionable gadgets, they are very long lasting tools for professional studios and audiophiles, to create and enjoy music.

DAC2/Minerva is an entirely new series from Weiss Engineering. There are many audiophiles who want to own a Weiss front end, but the Jason/Medea combo is not easy to afford. Moreover, computer audio storage/playback becomes popular, more high resolution playback sources materials are available. From a mastering engineer perspective, we know high resolution 24bit/96kHz or 192kHz recordings are so much better than the 16/44.1 CD resolution. DAC2/Minerva is designed toward this direction.

Top 3 questions in computer as source.

(1) Which soundcard is better?

(2) How can internal soundcard sounds as good as the external high end DAC?

(3) Is it possible that a noisy computer can produce good sounding compare to my high end CD transport?

Today music productions are mostly created in DAW (Digital Audio Workstation), either PC or MAC. There is no reason why computer cannot produce good sounding playback while the original source is created at the same place. In technical perspective, data integrity is important. Jitter performance is another major issue.

Weiss DAC2/Minerva features jitter free from AES, SPDIF or directly connected to PC/MAC via Firewire 1394. This is not just simplify the requirement of a good computer digital soundcard, which usually are expansive professional audio options like Lynx and RME. Weiss DAC2/Mienrva provides better de-jitter performances. In Mastering, we insert different digital processors to form a mastering signal path. If the DAC cannot produce good de-jitter performance, the more processors in the chain, the worse sound we will get. The mastering job becomes more difficult. It is the reason legendary recording and mastering engineer Bob Katz named Weiss DAC as Holy DAC. It is one of the few DACs in the market that capable to completely eliminate jitter for perfect conversion.

Weiss picked Firewire connection but not the more popular USB connections for reasons. From professional studio perspective Firewire is widely used in audio and video transfer. The new Macbook no longer equips with firewire connection. We think Apple is trying to push professional users towards Macbook Pro. For firewire control chipset, Oxford chipset provides the best performances in compatibility. 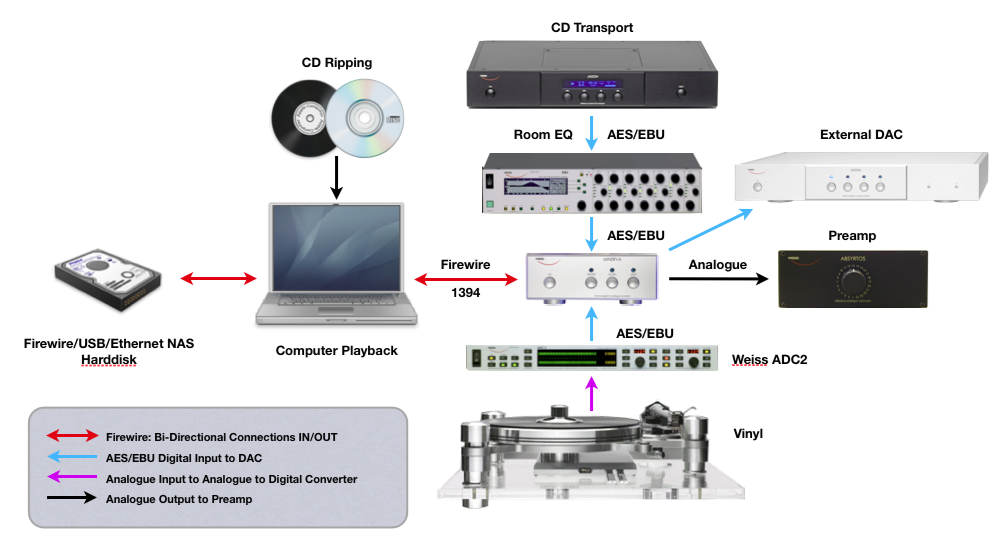 Weiss DAC2/Minerva is a full feature DAC. There are connection options to fit your need.

(4) DAC2/Minerva can sync to master clock via any digital input (AES or SPDIF), even using  the firewire 1394 connection for computer as source. (software setting on below)

(5) Vinyl and analogue sources record on computer and playback

DAC2/Minerva can record AES input signal to computer. Combine the Weiss reference ADC2, audiophile can record their vinyl collection with up to 24bit/192kHz resolution on computer hard disk for further playback in full resolution. 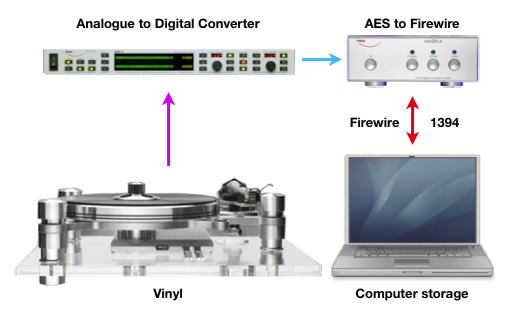 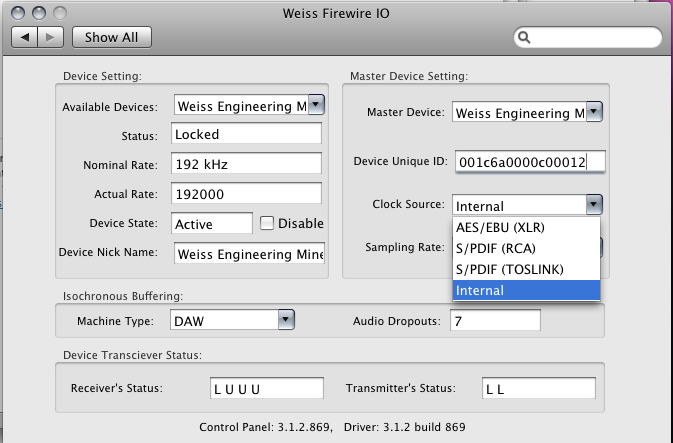 Devices Settings: You can view a list of available device, if you have more than one DAC2/Minerva or AFI1

Sync Source: You can select Internal, any pair of digital inputs or Wordclock input.

For studio (and few audiophile) situations, there are master clock to sync the whole system. DAC2/Minerva can sync to the master clock via any digital input, even using the firewire for playback. You just need to select under the PC/MAC Weiss software Panel -> “Clock Source”

Operation Mode: determines the stability of the system. For weak systems you should select Safe Mode Level 3. For lower latency Normal or Save Mode Level 1 can be selected.

Master: If you have more than one device, here select which device to act as Master

Operation Mode: determines the stability of the system. For weak systems you should select Safe Mode Level 3. For lower latency Normal or Save Mode Level 1 can be selected. 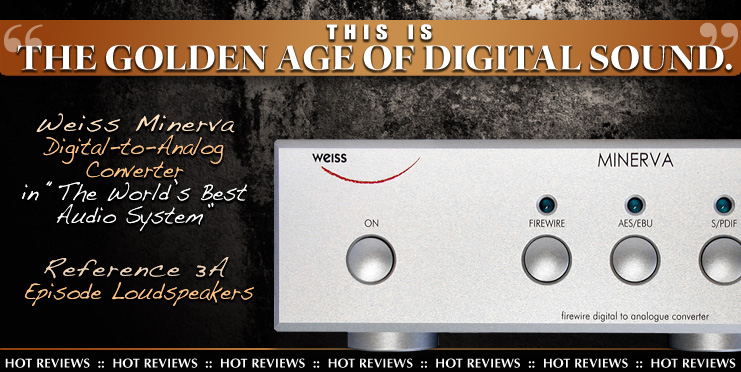 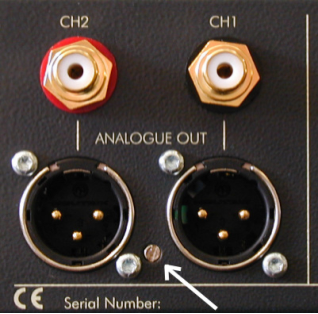 We have been waited months to release the new edition of Weiss DAC2/Minerva. They delay are due to newly added features. Selectable analogue output level matches well with different preamp/poweramp input sensitivities. Selectable by a rotary switch on the back, 4 settings, same level at both RCA and XLR outputs:

Digital Volume Control: 0.5dB steps over 120dB range. The volume control is done in the digital domain and is properly dithered, which means that the quality of the level control is at least on par with an analog volume control. Ideally the Minerva unit is operated at digital volume levels at or near to the maximum level in order to utilize the dynamic range of the Minerva. By using the 4 different analogue output level settings plus digital volume control, user can easily achieve an optimistic transparent gain chain.

Insert Signal Path: This mode enable DAC2 takes either Firewire or SPDIF/Toslink input as source, send the signal out to external processor and decode the loop back processed signal. This mode is perfectly mate with Weiss Linear Phase digital EQ1-MK2-LP.

Weiss DAC2/Minerva won Ultra Audio Jeff Fritz “The World Best Audio System” award, and indeed it sounds far better than I expected (sorry Daniel). It is NOT just a low pricing solution to fit the market demand. It has the most attractive mid-range that I heard from all DACs in similar pricing. British audio magazine HiFi News wrote DAC2/Minerva is as good as dCS flagship Scarlatti. The mid range is not colour like tube, but euphony and high resolution. This aspect is very important for high sampling playback. When I listen our up coming jazz records “Audiophile Jazz Prologue – Part 03” 24/192kHz master tape, the whole soundstage and timbre are remain warm and musical. I have test many mid range pricing DACs with high sampling sources, they usually sound thinner and lost density. The high end has never been such well define and musical. No wonder both Ultra Audio Jeff Fritz and Chris Connake from computeraudiophile.com mentioned this point when playing Reference Recordings 24bit/176kHz HRx. The bass area range is very full and deep down. I have reasons to believe this is due to the DAC2/Minerva analogue output stage topology.

Compare to Weiss own reference DAC1-Mk2/Medea, the DAC2/Minerva mid range is warm and attractive. However the reference DAC still carry better authority on bass and high ends. Greater dynamics and powerful. The DAC2/Minerva maximum output is +17dBu which is 5.48VRMS (peak level) on XLR, and lower on RCA. Both XLR and RCA outputs can be used at the same time without interference. There are separate drivers for the two outputs. The low output impedance (50 ohm) is capable to drive passive preamp, but the reference Medea DACs has +27dBU plus almost 0 ohm in comparison. Remind you the Medea costs four times over Minerva.

It is interestingly that all Weiss DACs has a character as “California sunshine” “Healthy” “Creamy” in my book. All frequencies are presented in very good ratio in the soundstage. This is a big reason why Weiss DACs are used in mastering studios. Mastering engineers rely on what they heard to finalize the master sound and they demand the clarity and micro dynamic even in the deepest and widest soundstage. Some of consumer DACs produce slight blur resolution at the deepest/widest soundstage in order to create a sharper contrast images in the front. Weiss does not produce such effect. 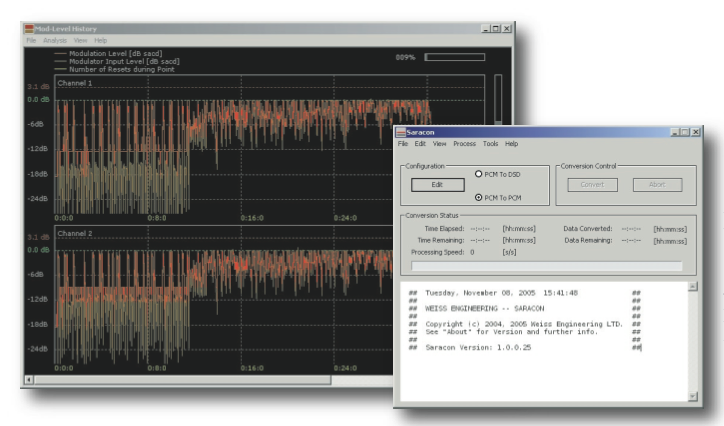 I tested up-sample ripped CD files using Weiss own professional computer program SARACON. It is the best quality sample rate conversion available in the market. How good? The THD+N is better than –180dB for 32 Bit fixed point I/O, unweighted. Audiophile can test with different up-sampling results and match with their own preferences. DAC2/Minerva supports all sampling rate from 44.1kHz to 192kHz. This can be a good upgrade for computer audio as source user. SARACON represents the best SRC you can find, has much higher value than audiophile cables.

Measurements: A loop through with our reference ADC We did these measurements in our mastering lab, it is not a manufacturer press. One can see how clean the spectrum is, even you have no technical background on measurements, you can see there is almost nothing but just the testing signal frequency. The measurements are constant in all sampling rates.

As the reseller and partner of Weiss, my comments are surely biased. From mastering engineer and audiophile point of view, I am truly happy that Daniel can create such a good DAC in this price range. It doesn’t need much more confidence to say that playing back high res materials with a computer can sound superior than any CD combo in the market. Technologies have gone forward. I met many Japan audiophiles during my last Tokyo trip, they are all looking into the NAS music storage. More and more records companies will release their high resolution music through different media.